Once the sailing season was over and most boats were laid up, Mike Peyton would sit by the log fire of his isolated cottage in the Essex marshlands, marking up the final pages of the almanac. With his characteristic black sketching pen, he would scratch lines against the nights which had a full moon.

“With short days and longer nights, you need to make the most of what light is available, and I love sailing along a moonlit sea,” the man who penned cartoons for yachting magazines in the UK, the U.S., Europe and Australia, once told me.

Mike, owned and sailed many different boats for more than 60 years, and both he and his novelist wife, Kath – better known as K.M. Peyton, author of the successful TV series and book Flambards, centred on her love of horse-riding – both cherished winter sailing.

It all began when Mike, a demobbed infantryman from the Royal Northumberland Fusiliers, came home from years in a World War II Nazi POW camp, to re-start his future at art school, firstly in Manchester then in London.

During weekends he paddled and sailed a canvas canoe, Vorlooper, down the River Thames, getting further seaward on each trip. On Christmas Eve 1949 he was exploring a labyrinth of creeks off the River Medway, in Kent and as dusk fell a fine drizzle began. So, Mike paddled towards a lonely barn in which to spread his sleeping bag for the night. The rain had ruined his rations; two loaves of bread, so he offered the mush to a pair of marsh ponies. During the night he was troubled by the nagging thought he might not have pulled the canoe far enough up the sea wall. So, in his underpants, he crept out to check. When he turned around, he discovered the ponies had joined him, expecting more bread.

It became the subject of an early cartoon.

Mike in his studio 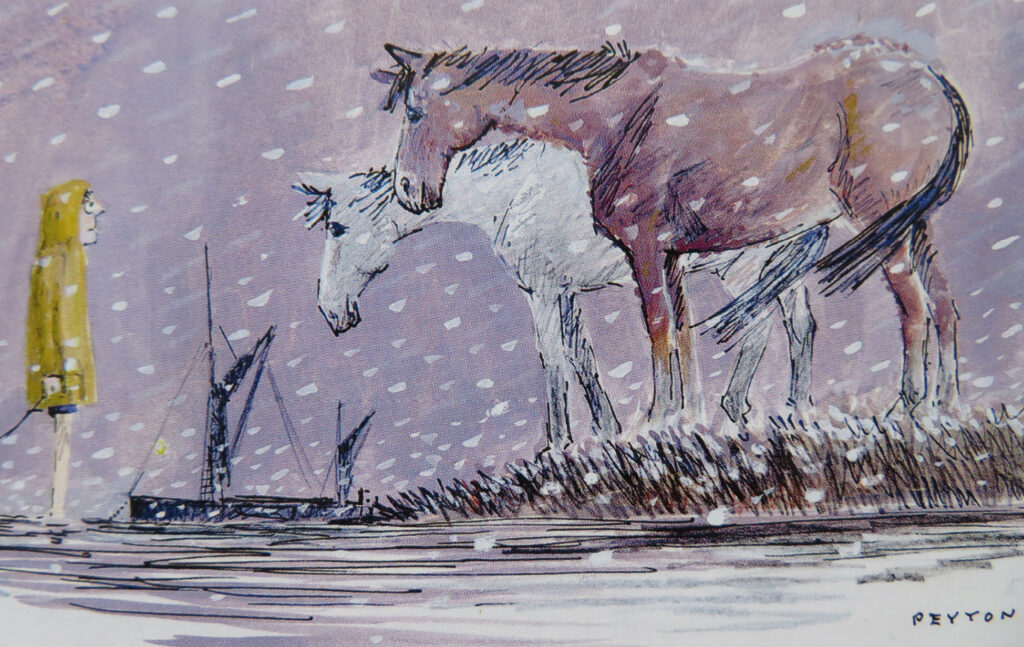 Mike’s cartoons came from lived experience and the yachting press always wanted his take on Christmas afloat. His four decades of throwing a Christmas Day party on the lonely beach at East Mersea on the River Colne, in Essex, plus his habit of sailing on Boxing Day to Winteringham Haven on the River Humber in Lincolnshire, where he laid up his boats with old Army friend and sailor, Danny Bray, provided much material.

“Although I’m hooked on winter sailing, there are times when I realise why it’s not all that popular,” he once told me ingenuously. In one of his three ferro-cement sketches, Lodestone, Mike set off during a particularly cold spell: ‘England is in the grip of Arctic weather’ the BBC weather report announced.

“Poking my nose over the washboard I could see why. There was about six inches of snow on the deck and the fresh easterly wind cut like a knife. It was like being encased in a snowball,” Mike said.
With a three-strong crew they set off back to the mooring via the shortest possible route: a shallow East Coast swatchway called the Raysand Channel which can only be transited at around half tide.

As his crew cast off the visitor’s buoy ropes, they disappeared in a snowstorm and as they sailed down the River Crouch: “The deck was so treacherous we had to sweep it and keep sweeping it. For the two of us with spectacles, the snowflakes drove directly into our faces hitting the lenses constantly and cutting our already limited visibility. For the other two, they had to narrow their eyes to prevent the driving frozen flakes from impacting their eyeballs. In the end, we relied completely on the instruments. It was impossible to keep a look-out as all we could see was swirling snowflakes.” 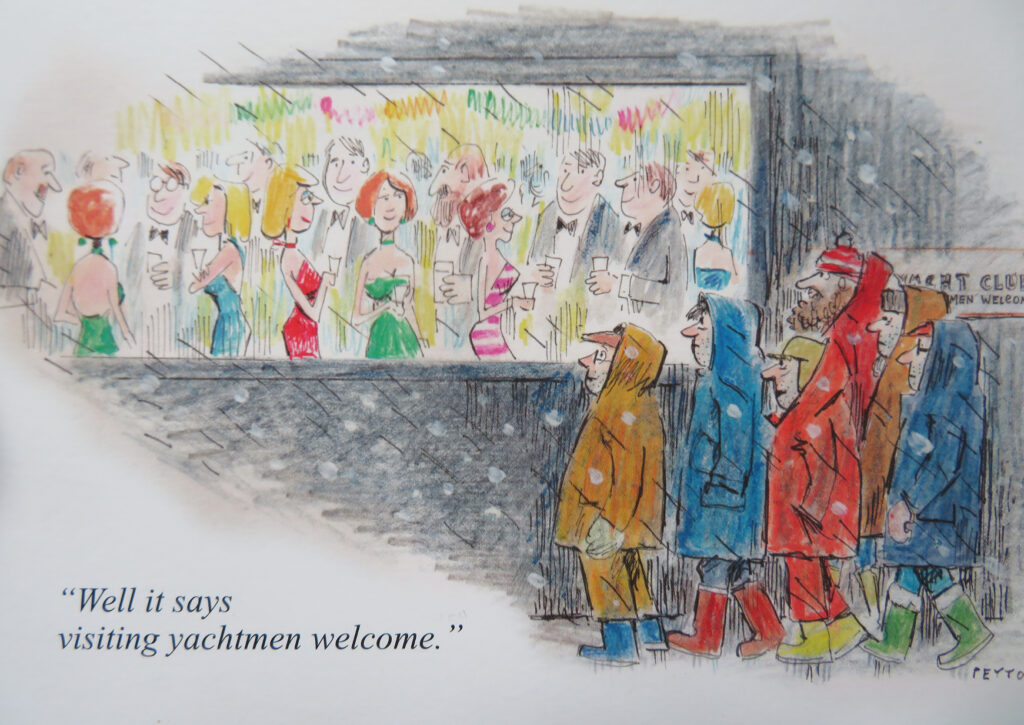 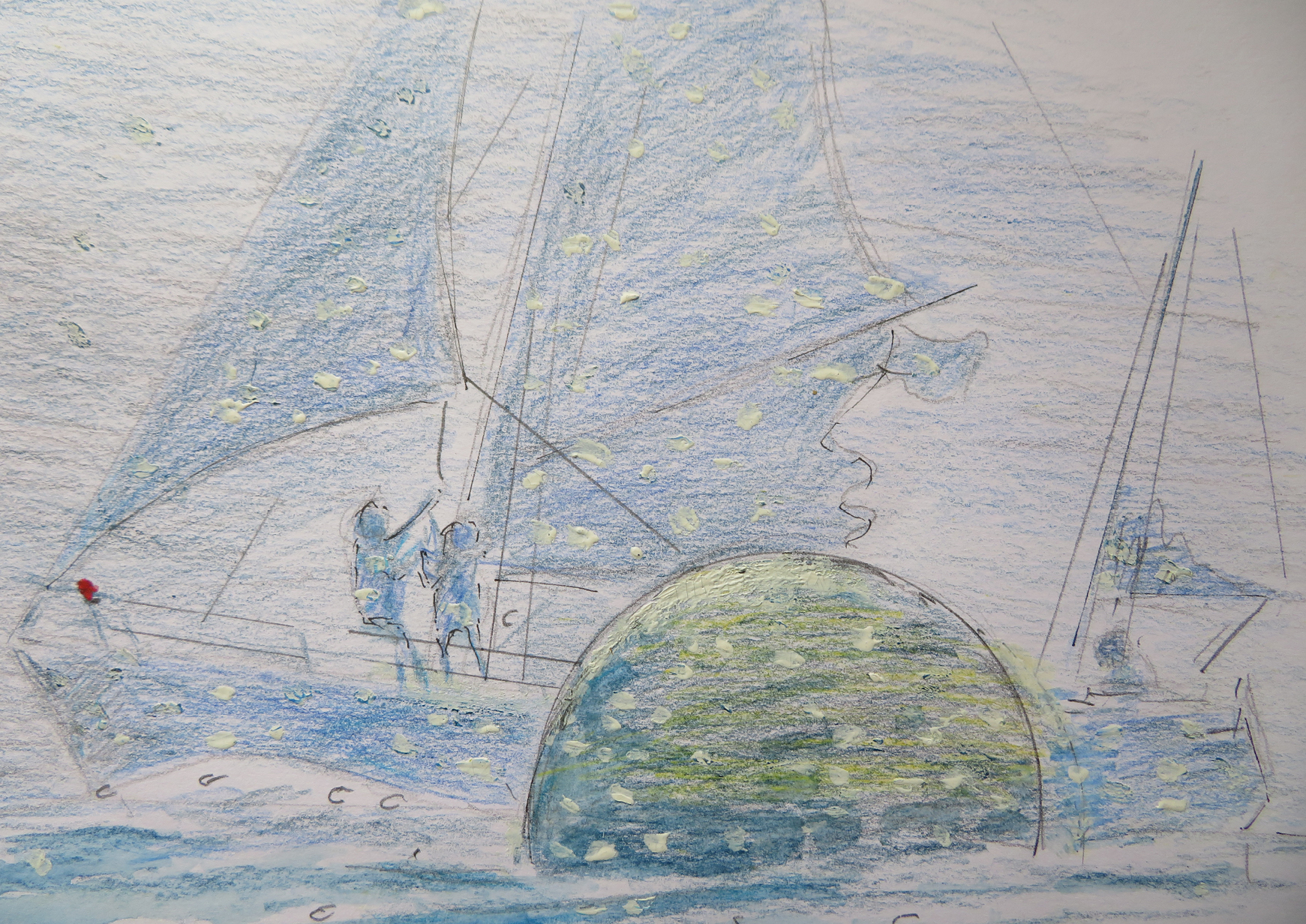 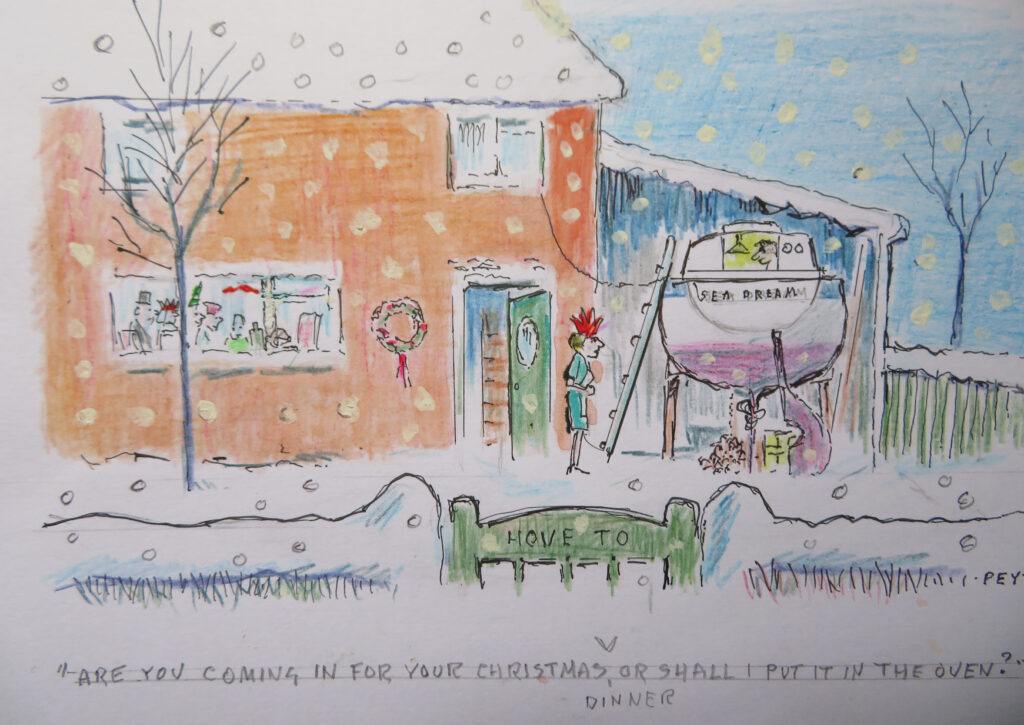 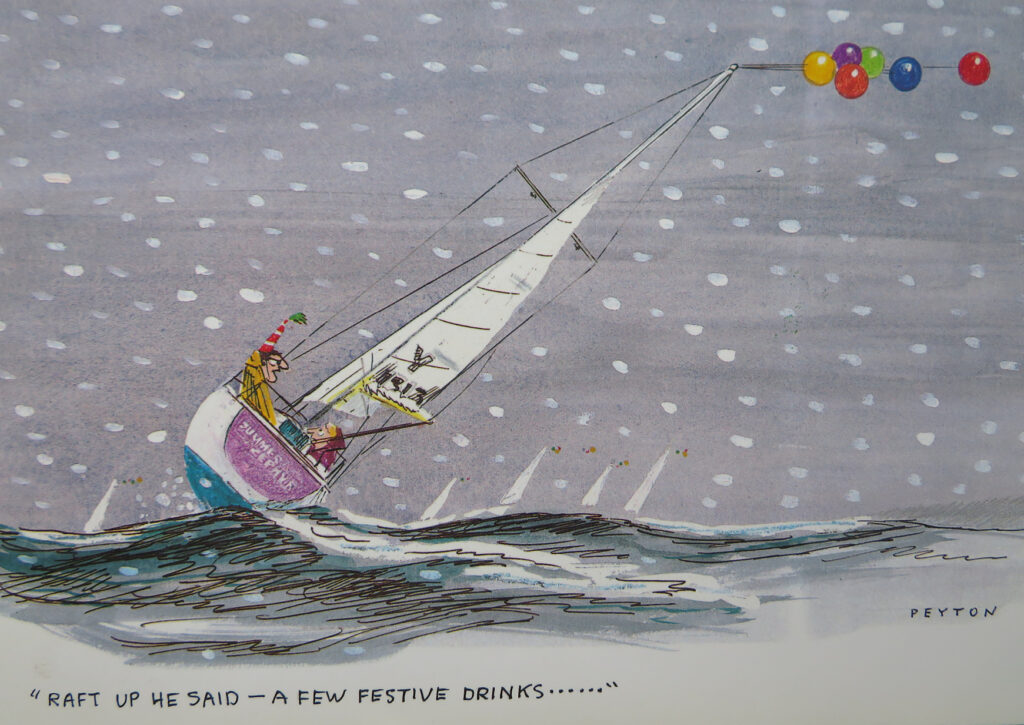 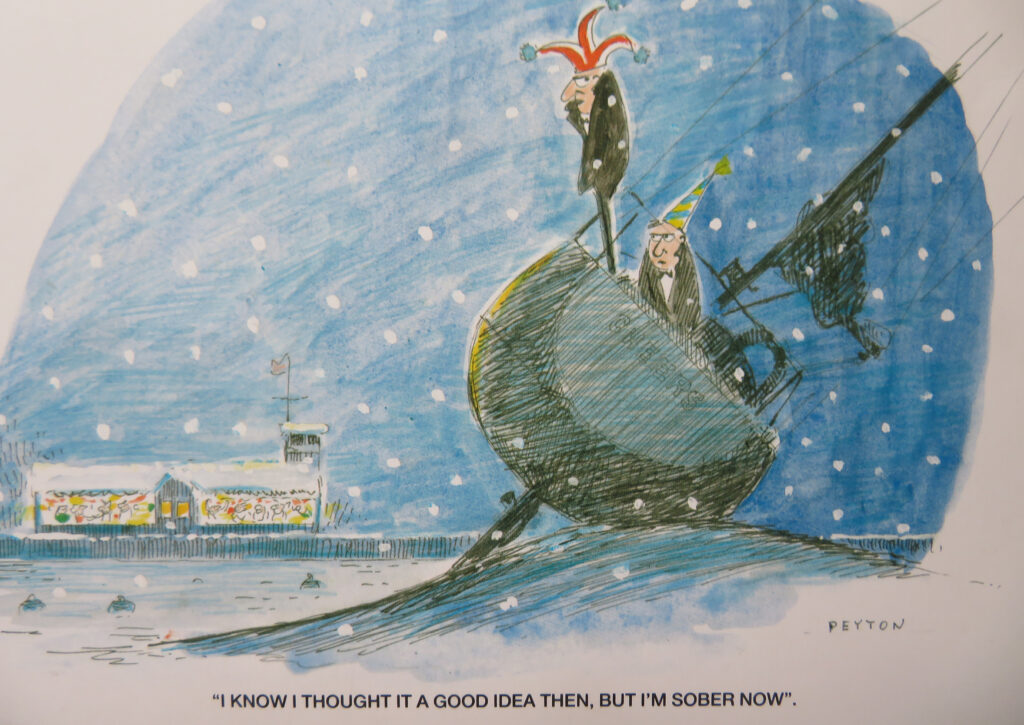 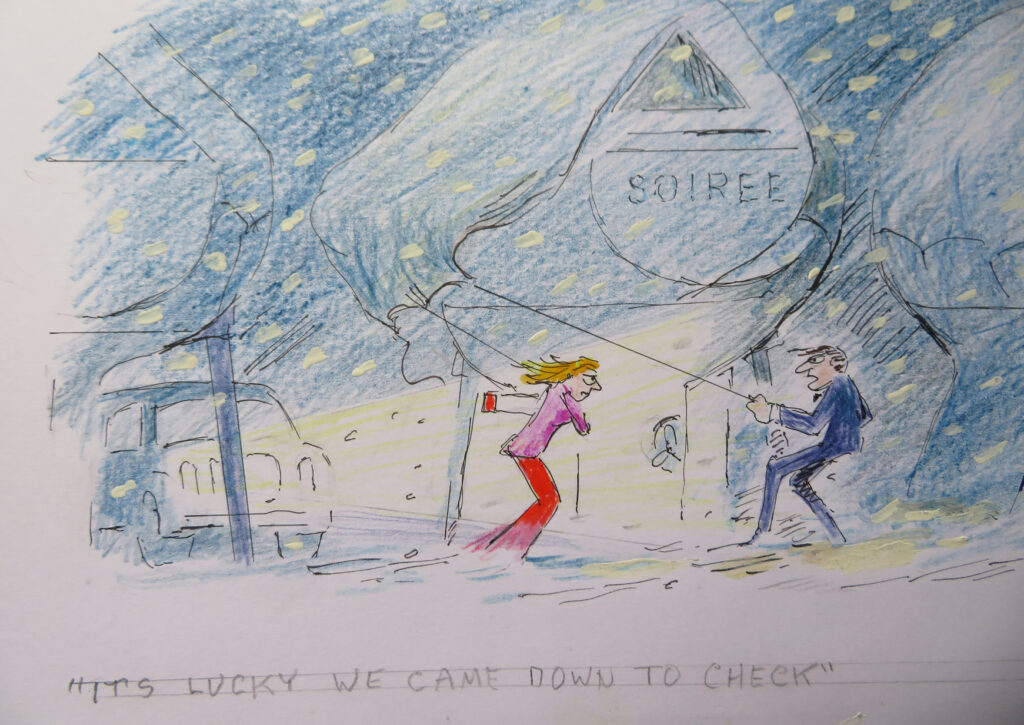 Dotted along the Raysand Channel are the sunken hulks of four abandoned Thames lighters. They were placed there at the outbreak of World War II as target practice for Lancaster bombers. Each sports a beacon on top of which is a cardinal mark. Fortunately for Mike, the blizzard he was sailing through lifted momentarily to show they were sailing straight towards one of these hazards.

“It was a relief to get across that swatchway back into the deeper stretch of the Blackwater,” Mike said, “and cook up a breakfast for champions!”

While writing Mike’s biography, Peyton, (Published by Adlard Coles Nautical 2009) I sailed with him one February in his last boat, Touchstone, a 38ft ferro-cement ketch, designed by Alan F Hill.

Down below the kettle was whistling and I fished around for the tea. To my horror, I found a limp cardboard box with tea bags covered in green mould. I deliberately brought them up on deck and started patting off the dust. To my surprise, even the man who’d suffered starvation in a prisoner of war camp was prepared to concede they were an infusion beyond ingestion and he scattered them over the side. “The seagulls’ll have ‘em,” he said mournfully hoping they would not be totally wasted. Not a fowl alighted on the calm river to inspect the floating items in our wake. Touchstone was well known to the avian population of Essex.

“Never mind, there’s coffee. I forgot the milk, but you take it black and I’m not fussy,” he said. Later we bought some fresh tea bags from a store in Brightlingsea.

It was cold, clear February weather and Mike shipped the coal stove chimney as the sun started dipping below hinterland Essex. I was cheered to see wispy clouds of smoke quickly grow thicker as the ‘knobs’ of coal caught.

The only sound below in Touchstone’s cave-like interior was the ticking of the chronometer on the main bulkhead and the hissing of the paraffin-fuelled Tilley lamp which Mike fired up sending choking black fumes into the cabin. Before the contraption actually gave off a steady, hissing light it had produced more flames than an Olympic torch and enough smoke to put the Flying Scotsman to shame. My bunk was beside the coal stove and I slept warm and snug, if a little kippered from the Tilley ignition.

In the morning I watched as Mike made the tea. “Old North Country habit,” he said as he fished out the tea bag from one mug and dropped it into the second.

For many years Mike chartered Touchstone, and one party was a group of railwaymen from Crewe engine sheds, who went back to work after the passage, with an order for a heavy-gauge, copper frying pan which would fit across both burners. They came back the following summer and the pan was still in use when I was aboard. It was ideal for winter sailing as Mike explained: “It’s oblong and therefore spans both Primus burners. You can do fried bread and move it to one side, then the bacon and the sausages, finally the eggs and, with the beans already heating on the coal stove, a meal fit for a king.”

Dick Durham’s biography of Mike, entitled ‘Peyton’ is available on Amazon on Kindle or hardcover. 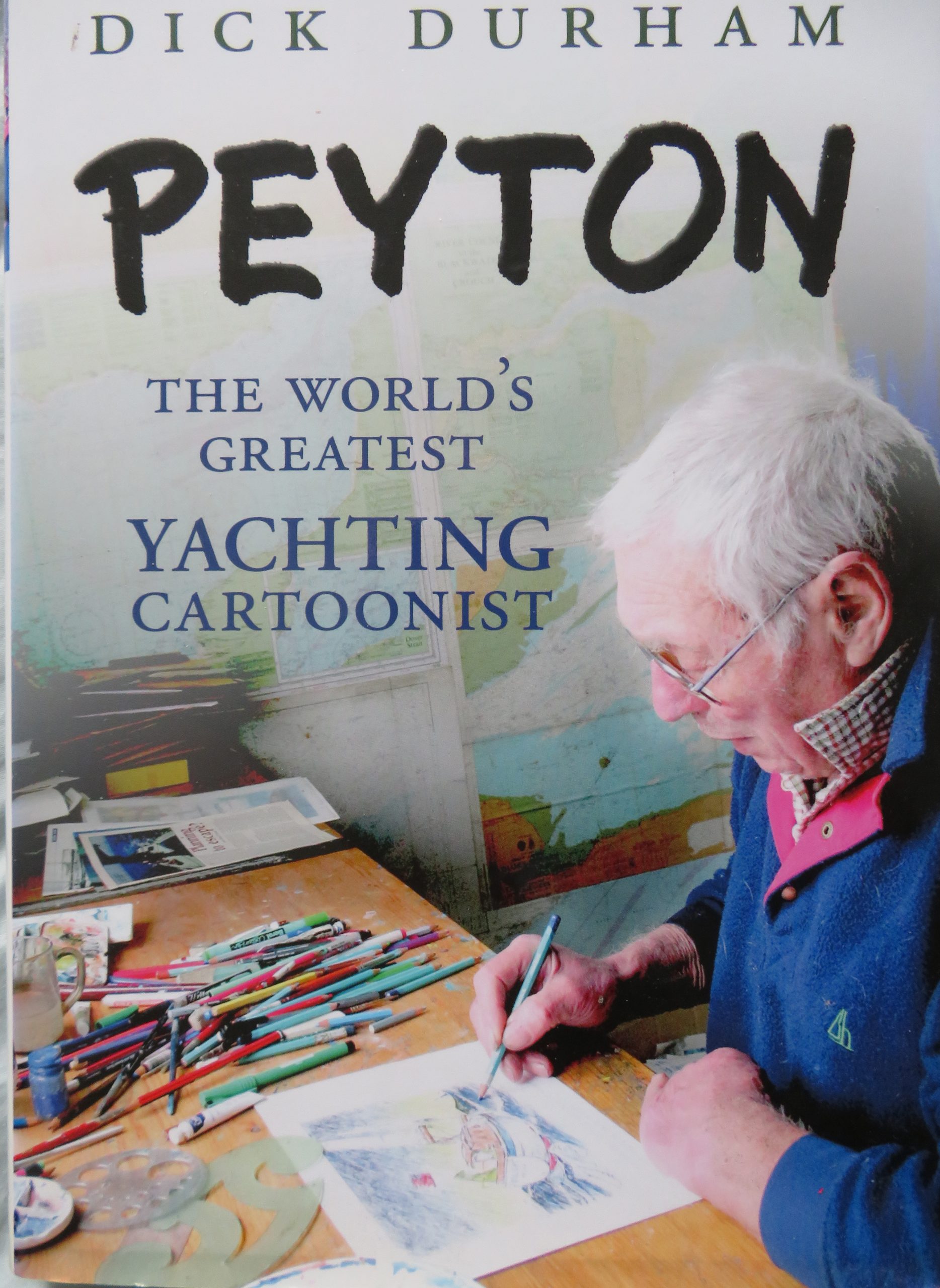 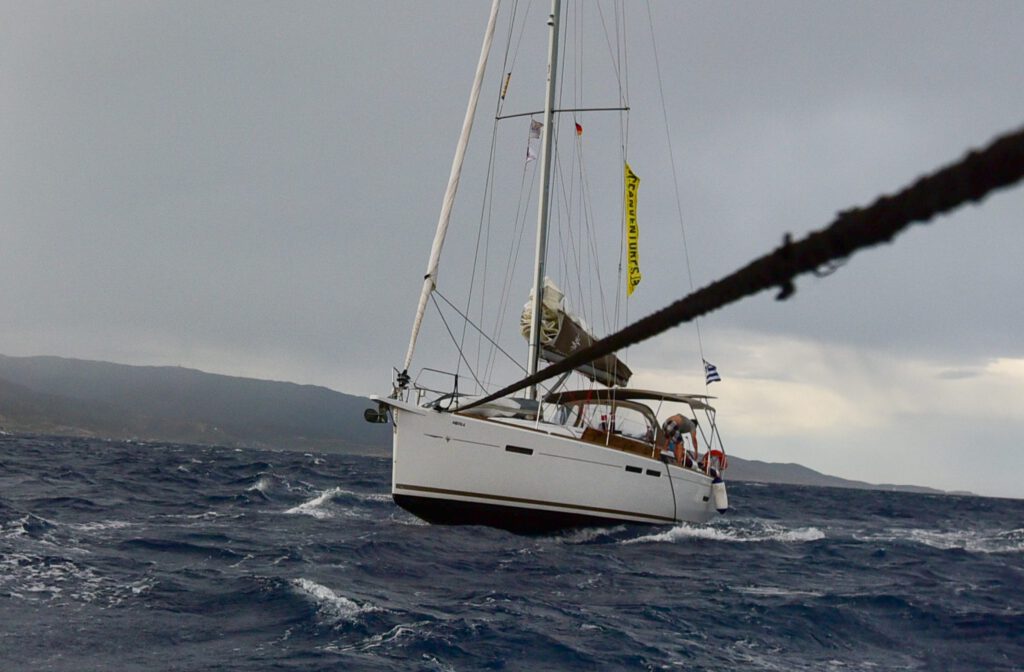 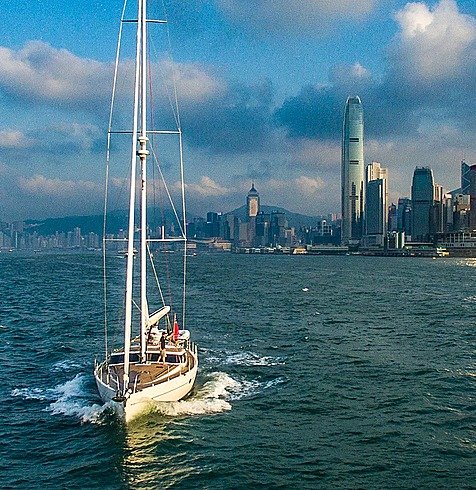 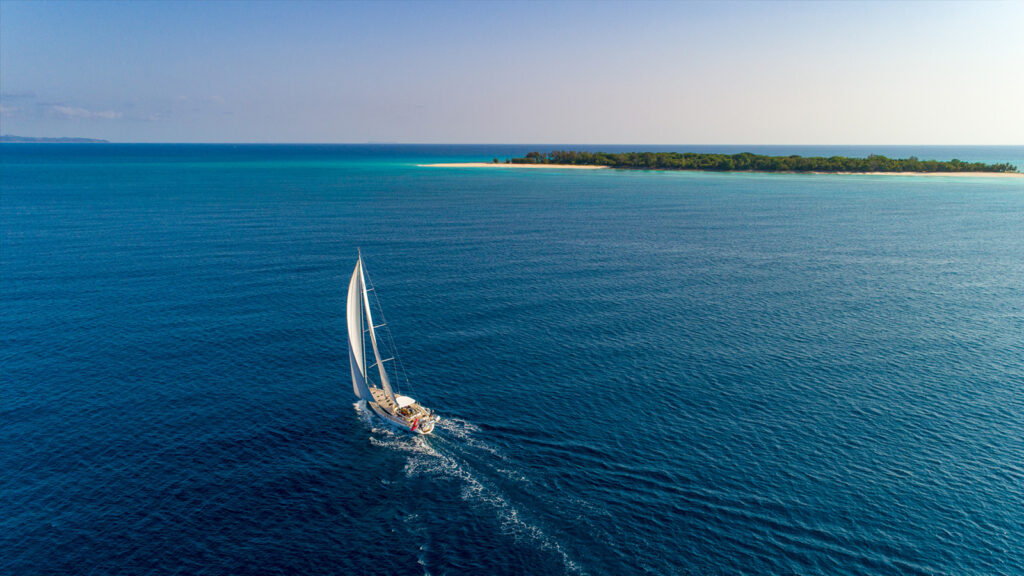